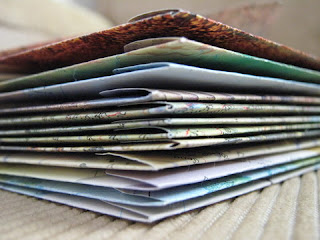 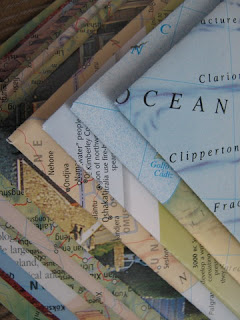 ﻿I have always been drawn to printed words, even before I knew how to read them. One of my earliest memories is sitting in church, looking at the bulletin filled with hymns and psalms, verses and dense paragraphs. To me, the words were just blocks. I knew they held meaning, but I didn't know how to decipher it. My mother had given me a pencil and I drew lines between the maze of words. My goal was to start at the top of the paper end draw a line downward until I hit a word, then trace along the top of the word until I got to the space at the end, then drop down to the next line and repeat the process. If I got to the bottom of the paper before reaching the side of the page, then I won! It was very exciting. This was my usual Sunday morning activity and it kept me quiet week after week.
One day when I was either nearly or newly five, while my mother was reading a story to me, I told her that she was doing it wrong. "Mommy, I don't like the way you read, and I don't like how you always get the voices wrong."
"Well," she told me, "if you don't like my reading, then maybe you should read it yourself."
I wanted to, but I didn't know how. So I asked her to show me. She explained, "You look at the word and you sound out the letters, like this. The 'M' says mmm, the "O' says ah and then another 'M'. M-m-m-o-m-m." I clearly remember the epiphany I had at that point. It was all so easy! Why hadn't anyone told me that before? I could have stopped listening to my mom's annoying character voices long ago. Here I had thought that reading was about memorizing some difficult magic code, but it wasn't. It was just putting the letters together the way they sounded. (I am fully aware that for a lot of kiddos, reading does not come this easy. But for me, one day I couldn't read and then suddenly I could. I remember the whole print world coming into focus, my reading light-switch flipped on in a single conversation.)
The next week in church, I looked at the bulletin and sounded out words. There was a list with a tidy stack of 'the's making their way down the left side of the paper. There were short words that I could sound out and long ones that I couldn't. I used my pencil to divide the long words into chunks and then those words came clear too.
Maybe it is the early association with reading and church. Maybe it is just the intense way I have always loved books. Or the stories I remember reading about the Gutenberg Press. But for whatever reason, I have always balked at the thought of altered book art. My children, their friends, and even the kids at school know me for saying, "Books are our friends. We treat them with respect." Artist trading cards made from loose pages, and small gifts wrapped in print seem at once sacred and sacrilegious.
But then a couple of weeks ago, a large Atlas appeared in the "Getting Rid Of It Pile". (We have a designated spot for the kids to put things that they no longer want. I go through it every few weeks and pass things on to friends who can use the items, or give them to Goodwill.) Unfortunately, the book was so heavy that the binding had cracked and failed with use. There was no one I could imagine that would use the book, and even Goodwill was likely to toss it. For all intents and purposes, the poor book was dead. Then I thought of all the cool homemade envelopes I've seen. 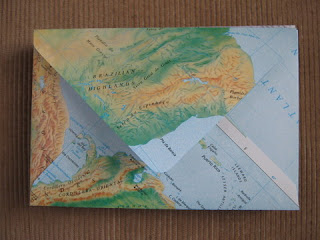 I took an envelope out of my stationery box and carefully pulled it apart at the seams. Then I used the open envelope as a template to trace onto a page torn from the map book. I cut along the lines, folded in the same places as on the original envelope, and glued the paper together. Lovely! It made me happy to see the dead book coming back to life in a new form.

I still love books, (of course!) but I'm starting to see that they can be altered and still be respected. Now I am on a roll, scooping up the languishing books that have been shedding pages around the house.We have a Calvin and Hobbes book that was losing leaves left and right, so I cut out one relevant strip and glued it to the front of a blank card. An old Prima Guide for Phantom Hourglass has been falling apart, so I used some pages to cover a box I was sending out to a Zelda fan. I've had to keep reminding myself that these were not made on a Gutenberg Press. The books I am using are not one in a million.  My son joined me in the envelope process and produced one cute, somewhat wonky envelope. That envelope he made? The smile he gave me? Those were one in a million. 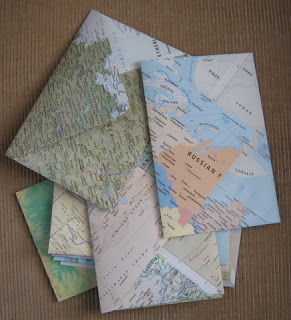