We are back home and back to the craziness of school and swim lessons and--with a teenage exchange student visiting us for the year--trips to the mall. I love to tell this story about my youngest, a cracking whip of a child who could spell 'hatched' and 'create' in preschool. (Not that I taught her anything.) We needed to make a trip to the mall for some reason or other, and the four year old who could define photosynthesis asked, "Mommy, what is a mall?" So with a teenager in the house and my oldest beginning to embrace the marketer-driven 'tween' stage, we have entered a new phase of life: malls, the right shoes, and blingy t-shirts. It is going to be fun! 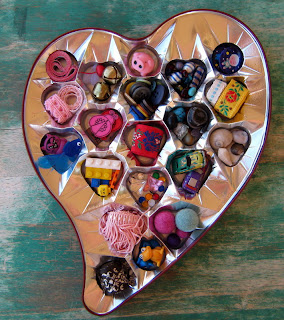 While my oldest was off at school one day this week, I went into her room and cleaned it top to bottom--something I have been threatening to do for a few months. I swept and dusted, wiped the walls, and put in some new shelves with baskets for her felting and sewing supplies. Now everything is reorganized and boxed and easy to get to. Most importantly, now it is easy to put things away when done. In the process of cleaning,  I found some missing crafty items, a lifetime supply of pencils and many many little knick knacks. What else was there to do with them than make an Insiration Box?
I also put aside a lot of items to donate to Goodwill.
I don't want my oldest losing something next month and then accusing me of giving it away. And I, um...also don't want her to end up on one of those hoarding shows in the future saying, "It all started in fifth grade when my mom cleaned my room and threw everything away." (People who collect too much stuff usually tend to have a story like that, right? But I always wonder if it is a chicken-or-the-egg kind of issue. Do they collect because they lost everything, or did they care about and remember the loss more because of latent tendencies to collect?) The items that I had set aside for the donation box were in a huge container outside her room, so I 'gave her ownership'  by asking her to take the things and put them into bags. That way she would be able to see what she was getting rid of.  She was permitted to rescue two things to give to friends or her sibs and five things to keep, provided she found a home for them in her room. She only kept two. Whew! That was a relief to me.
The last few weeks have been a lot like this re-purposed Valentine box. You know, full of lovely treasures, but chaotic at the same time. Luckily, we still manage to squeeze in some creative projects here and there. But when we run out of ideas, an Inspiration Box like this is a great way to brainstorm. The juxtaposition of objects makes me think about things in a new way: "I love the way the vintage blue and white ribbon looks next to the chunk of turquoise. How could I use them together?"
In honor of the hodgepodge of items in the box, here are a few knick knacky paragraphs about things going around in the chaos: 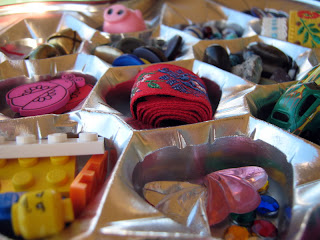 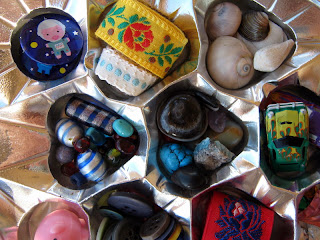